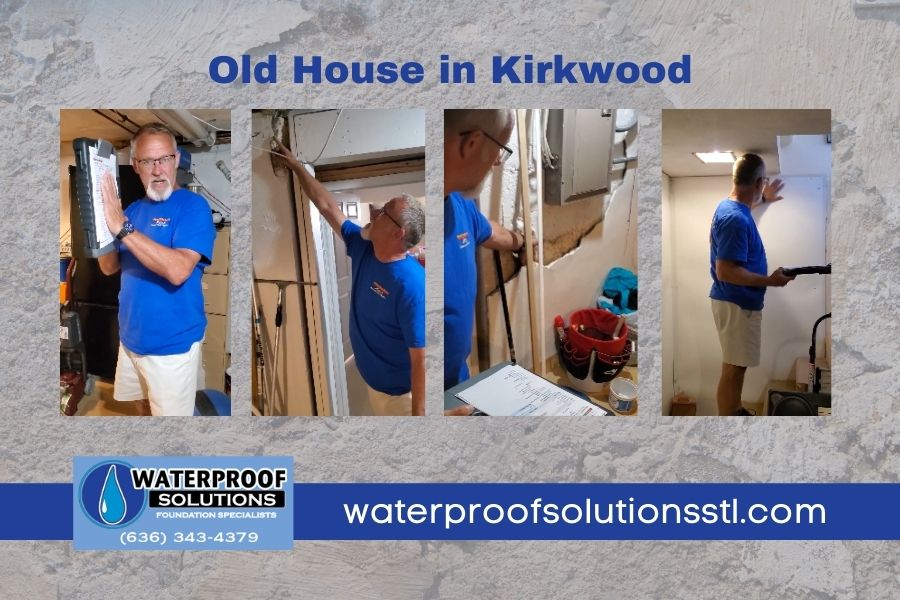 It’s a 1929 house. It’s poured concrete, as we can see here, we can also see that it has a half inch of coating on it. Where you can really see it here, where it’s all kind of walked away from the wall. But when an old house like this starts to leak, the water will come through some of these segregated areas in the concrete where there might have been too much cement or, you know, dirt. So this gets inside the forms.

These forms were actually used for the house, they’re actually floor joists you’ll actually see on these old houses. They didn’t waste anything. Kind of like when you bought a Model A or Model T, the actual crate that it was in, was put into the car.

So this company is from Illinois. It’s got some kind of a crazy channel drain in it. We never want to see how it looks going to this on the wall, but there’s a little small channel drain in.

The bigger problem is the house has some wall cracks in it and it has some leaking. So we are in the basement. You’re on the negative side of the wall. You’re on the outside, you’re on the positive side. And this is where it’s giving an issue, with plastic it has things leaking and falling down behind it. When I pulled a piece out over here, it was wet to the touch. Just everything starting to fall down, load up the system.

The pump doesn’t work at all now. So we propose to put in a three wall system, this being the side of the house. The front of the house is I’ll show you now. Watch your head, cameraman, as we make our way to the front. As you come down the steps to the front of the house, it occurred to me right away. I noticed, this was as I turned around, I noticed that it’s been worked on a lot and then I realized we have plastic up and what we have here, this is what’s going on behind the plastic. This is all, that walls trashed. That runs all the way down. Into the house, as we can see here it stops in part of the plastering. So we just don’t know what’s going on behind here until we get to it, we can see a crack there now.

So our advice is to go ahead and take down the plastic, get these coatings off the wall. We know we have a pretty major crack here. Another way you can check it is to do this hard. Soft. Hear the echo? Then you know you’ve got water behind it. I just spooked the dog.

So we’ve got a cedar closet in here that will have to be removed off the wall. Everything off the wall. We’re going to go down this other side of this wall and put the drain tile in. We got a leak coming down in this corner where mold is showing up. So what we want to do is, once that cedar closet is taken out, there’s a crawl space on the other side of this wall here. I must fill up with some water to some extent. She said it’s been sealed and taken care of.

So we’re going to run the drain tile down this wall along the front and back to the other corner, take the plastic down. We know we have one wall crack.

We’re going to put a certain amount of cracks in the estimate of the bid and then we’ll come up with the linear feet for that. And then the guys, times that amounts will have a certain standard to go by. And we’re going to move forward on the cracks. So we’ll send this with the bid. Thank you.

We know basement leaks sometimes come as a surprise. For this reason we offer financing options for our foundation repairs. Learn more here.