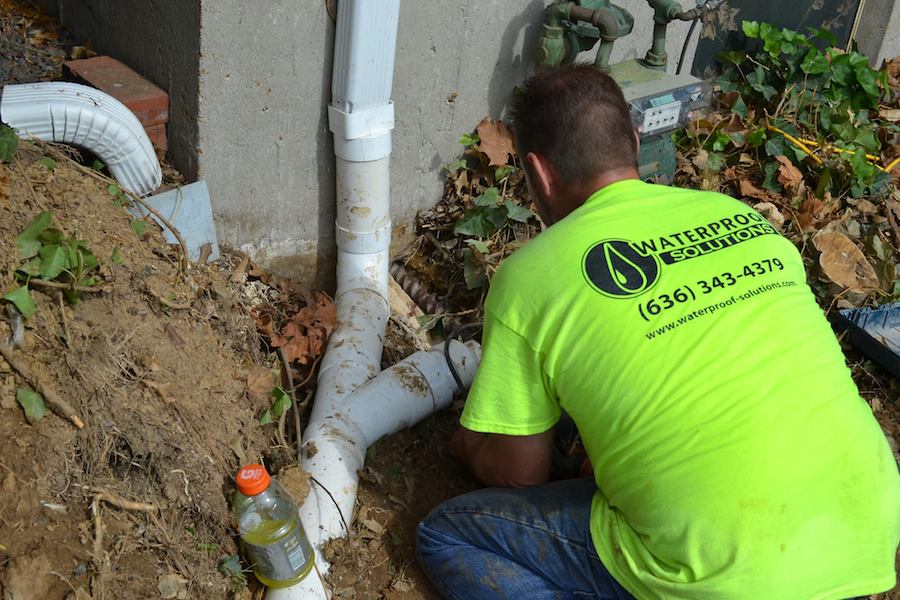 Hi! Well, it’s time to talk about downspouts and waterproofing. So many times we chase symptoms. When I say we, I mean the industry, or the homeowner, or the sales person. We see the leak, and we’re drawn to do something about it, right there. And I appreciate that. Who wants their carpet wet? But whatever you’re doing better be temporary. Because if you haven’t gone to the source of the problem first and figured out why it’s leaking, you may be shooting your foot off. You may be causing an even bigger problem to the wall or foundation.

I digress. You know it all really starts at the roof and the downspouts. One inch of rain sends 250 gallons to each downspout, to the corners. That’s an immense amount of water that can ruin your foundation, just that alone. So your downspouts need to be brought away from the house and not in black corrugated pipe to no man’s land. Making jokes at black corrugated pipe is easy. But on my own house I put it in to start with because I didn’t know any better. This was years ago, so doing it’s better than nothing. Especially if it is going to daylight but the sun will cook it, the weed whipper’s going to break it, moles can chew through it, and if you’re burying it into the ground it’s eventually going to silt up and back up.

So if this water backs up on your house, you’ve now got a bigger problem. If you’ve tapped the sump pump into it, now you have even more issues. We suggest going to do daylight, everything being in PVC with cleanouts, dry wells with vent tops not pop ups. Because guess what, pop ups only pop up in the store, they don’t pop up in your yard when the lawn mower smashed them or they’re filled with mud.

So a lot of these intentions are good, but the path to hell is paved with good intentions. We don’t need good intentions anymore we need some clear advice. Managing your outside, it’s very important that the earth does not pitch at the house. If you have landscaping pointing at your home that has to be corrected. And please do not put the French drain on your home. Think about how much water that drain’s holding while it’s not flowing. I can’t tell you how many times I’ve had to take those out of a damaged home. Concrete, if you have a patio that is tilting at your house, it’s pulling the steps out of the doorway, don’t ignore that. It’s going to push your wall in.

And please don’t mud jack it. Mud jacking front porches and rear patios that are on the house, not so much the patio at the footing, but a patio that’s on a foundation wall. You’re now putting all that slurry and all that on to the house. It’s not doing anything for the sub soil what needs to be built up on so don’t do that. Or at least consult somebody if you’re pressured into it. Because I’m going to tell you only sellers mud jack, buyers don’t. Homeowners don’t, sellers do. It’s cheap, it’s fast, and gets you where you want to be, temporarily usually.

French drains need to be a good six, eight feet away from the house if you’re going to have them outside. Make sure things are pitching away, make sure you’ve manage the water. French drains outside they should have a geo textile just like inside the house. And we’ll talk about that in minute.

It needs to be river rock, not clean rock, we don’t need the minus around. If you’ve ever had a gravel driveway and you picked the rock up and you looked on your hand, that white chalk is minus that cleans off the rock even if the rock’s been cleaned it’s still going to be crushed, it’s still going to build up. So you don’t want your outside French drain to fail faster than it needs to.

So French drains, proper landscaping, downspouts away, porches and patios not pointing, now you’re in the right place. Now you’ve done everything outside to keep your inside from having problems.

Feel free to contact us with your questions. Waterproof Solutions is a learning resource for homeowners and industry professionals.