Every Foundation is Different 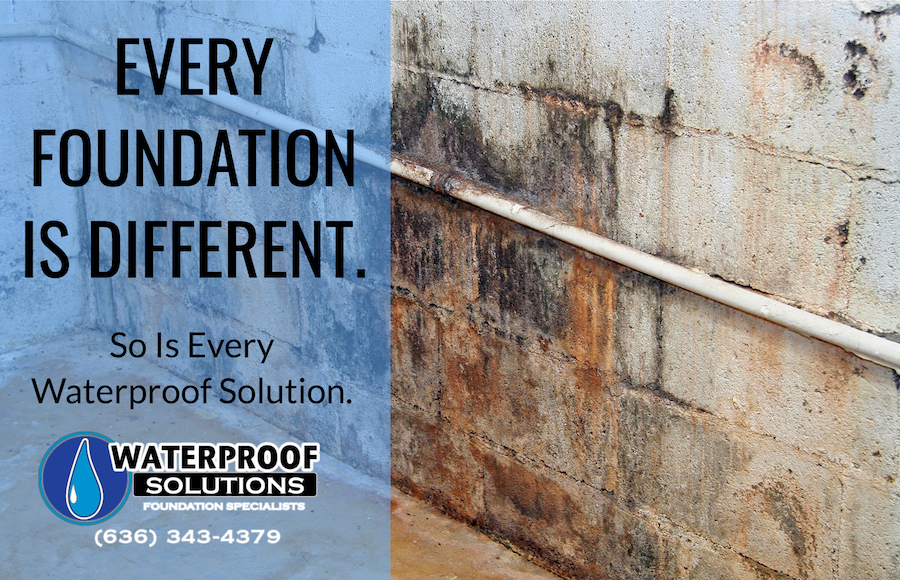 One of the most important things we need to talk about is how we navigate the inside of your home. Some basements are finished, some aren’t. Others are stone, some are block. And some others are cast in place, or brick. Each one of these bring a different dimension to the table. And guess what, some of these homes don’t have footings!.

How many times have I gotten in arguments with city administrators over this. But at the end of the day, when you don’t have a footing in your foundation, you can’t put the typical drain tile system in. Even less feasible is a channel system, which is a channel drain that’s set on top of the footing. It’s a labor saving device. It’s called a “patented process.” Call it what you will, it doesn’t collect nearly as much water as a typical drain tile pipe can hold, with the proper rock around it.

Just so you know, that floor, heavy carpet, that concrete floor has nothing to do with your foundation, except it might talk to you about what’s happening with it. So let’s talk about that. You’ve got this footing that the wall sits on, if the world’s perfect. We don’t dig deeper than that footing. If we do, we undermine the footing of the house, and the footing and the wall of the foundation.

Dangers of Radon in Your Foundation

When a foundation flood is broken out, make sure that the footing and walls relationship is proper. Don’t put a bunch of rock on top of the footing because the water’s leaking across the top. It’s not the right idea. That will kill off the rebar. The footing will eventually drop and you will have to have the house piered. Oh, nobody talked to you about that? Kind of funny, most of them probably don’t know.

If you have radon in the house you have to make sure that your floor cracks are sealed, so that you don’t hurt yourself. Most of the waterproofing companies in St. Louis don’t put a radon type pit in so you just have all that flooding into the house.

I don’t care if you’ve tested your house this month, this week or next week, every house in this town can show radon at some point in time. Having lost both of my folks to cancer, I can assure you that I don’t want to do that to anybody. It’s one less thing we need to worry about.

Secondly, that trench that we’ve now dug, when you see the propaganda pictures from some of the companies talking about how the traditional drain tiles don’t work, well it’s because they were done poorly. Builders do them poorly most of the time because they don’t feel like they’re necessary, because they aren’t made to do that. It’s very important that a geo textile be in that trench. That geo textile must be put in that trench before the river rock’s put it, and I said river rock. We’ve got so much river rock, it’s so abundant around here, why wouldn’t we use it? God’s already knocked the edges off it, clean as a baby’s butt, ready to go.

So you put that drain tile pipe inside of that, you’re good as gold. It’s never going to be messed with. We don’t have to worry about insect infiltration, silts and sands. We have a lot of clay in this town but nonetheless. This is the proper way to do it.

Then a vapor barrier is put over the top of it. I don’t pour my concrete right into it. So when you see the pictures of bad drain tile systems or waterproofing done, it’s because it was slip shot missing every step, not photographing the work as they go, not proving to you what is. I mean if we have an issue with the footing, let’s talk about it, let’s fix it right then. It’s not that hard. But if you don’t know the questions, how can you ask them? If you don’t know the procedures, how can you follow them?

We Are a Resource for You

That’s what Waterproof Solutions is here to do. We are going to bring every one of these pieces into discussion. Again it’s not about being right, it’s about getting it right. I hope to learn from this whole thing, when you mail in your questions, (and I hope you do), send me a picture.

Send me the hard ones, send me the easy ones, there’s an answer for all of them. I might learn something, I hope to, and I hope to teach it when I do. If we treat this industry like doctors treat theirs, we’re gold. We’re only going to get better and we’re only going to use the right medicines at the right times. Check our reviews on Angie’s List.

So everything in our industry has value and has its right place, from a channel drain, to a tie back, to a soldier beam, to a push pier, they all have their place. Let’s just make sure it’s the right place and the right application. Questions? Contact us at Waterproof Solutions. Let us be a resource for you.