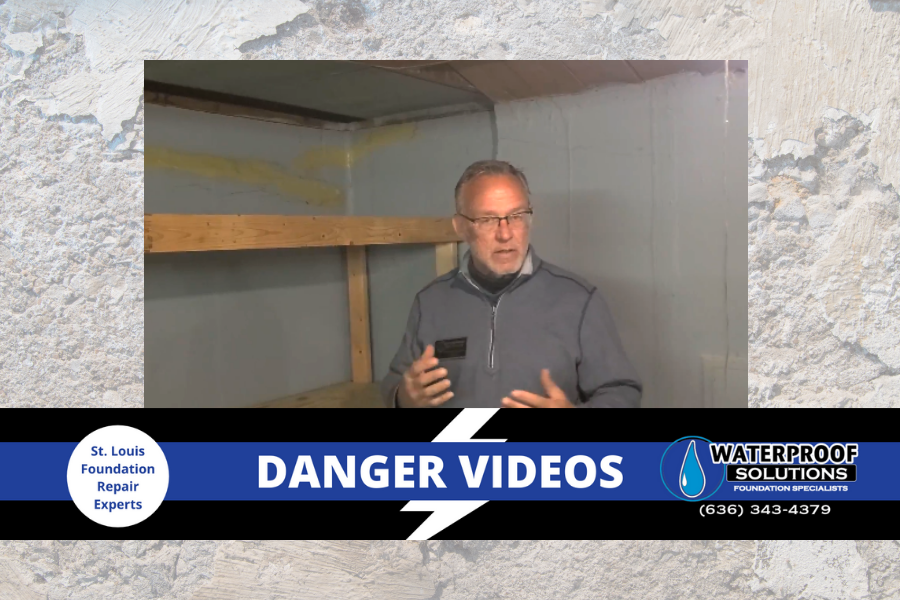 Hi everybody! Thanks for joining me. Today we’re going to talk about failed rebar.

Working in this town as much as I have, I’ve gotten to know the neighborhoods. And I know this one really well.

Today we’re working with a cast-in-place foundation. This kind of foundation is made of concrete, poured in between two forms that are reinforced with rebar and metal snap ties. When a basement is built, they use snap ties to hold the forms and the rebar together. Sometimes, water migrates through an opening in the concrete around one of the ends of the snap ties and reaches the rebar. The water causes the rebar to expand—up to seven times the original size—causing the concrete to blow out.

That’s what happened in the basement we’re looking at today. Sections of concrete are blown in several places in the walls because of water damage.

It looks like someone tried to patch one of the walls with an epoxy. They probably thought it was just a cosmetic problem. But it’s bigger than that.

As we make our way around the basement, we see how the damage seems to diminish and reappear. In other places, the wall fishes in and out. This is because of how the rebar pushed the concrete against the forms as they poured it.

There is some good news, though. We can see some old repairs on one section of the wall. What’s cool is that this repair wasn’t structural. But if we had structural issues with the house, this repair would not hold. This tells me there are no problems with the structure of the house itself.

The windows along one wall were covered when an addition was put on the house. And we’ll need to repair the damaged rebar around those, too.

To fix it, we have to remove pieces of the concrete and treat or replace the failing rebar. After that, we’ll put concrete back in place and cover it with carbon fiber. Carbon fiber will reinforce the concrete and hold it in place. We do have to repair the area around a soldier beam, but there’s no pier leg on that side of the house. There is one on the other. We’ll take a look at that now.

On the wall by the sump pump, it looks like they had to add an H-beam and a pier leg. We can see where they repaired the floor and how the drainage system goes around it.

I would suggest to the homeowner that we get a basin in this basement that is radon ready and avoid putting steel in the floor.

We’ll also make sure the sump pump discharge works properly because it isn’t right now. And we need to fix that. We don’t want the pump sending water to the wrong places. But other than that, the home has the start of both a drainage system and a radon system.

Those are big updates for an older home. It certainly needs to have the rebar taken care of so we can get rid of some of the sag. I’m not here to inspect this place, but this house is sustainable.

We’re also going to investigate the front of the house to see if there’s any damage upstairs that might warrant another beam being put in. Here in the basement we can see how much the wall is pushed in around the top of the beam and that there’s a gaping hole at the bottom. That hole needs no shrink grout.

Other than that, it’s just me being the dentist, you’re supposed to floss. That’s what I do.

Do you have any questions? Feel free to call me, Stephen Burton at Waterproof Solutions.