by Waterproof Solutions Residential | May 21, 2019 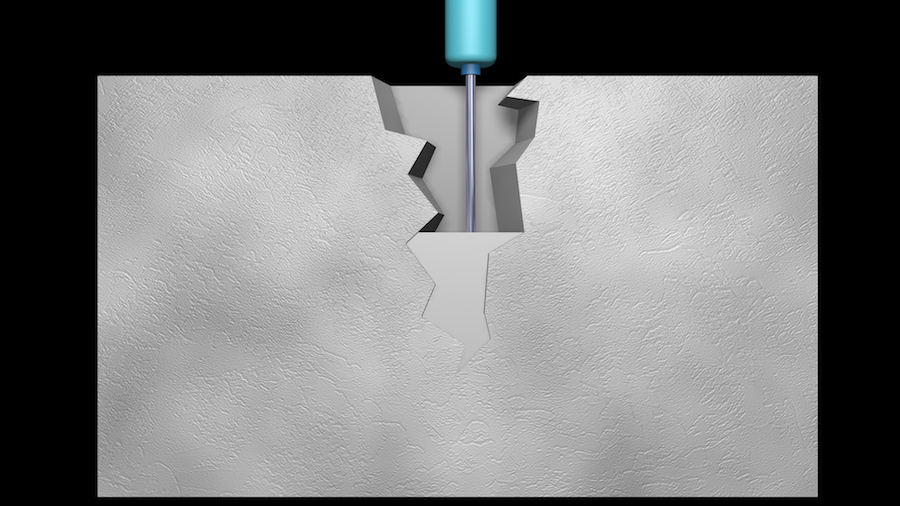 Today’s lesson, cast and place foundation, epoxy injection versus closed cell urethane; what do they look like, how can I tell the difference, when are they needed?

So, this crack right here is cast and place foundation. See the form lines showing that the concrete was poured into, cast and place. This white chalk that’s left, a lot of times people think that’s mold, that’s efflorescence, that’s the trail the water leaves after it comes through the chemicals that are left.

We have a crack that’s kind of shown itself here. A little spider coming off of it here and then as it works its way into the corner, and you know this is a condominium complex.

These foundations are all put together, and they have a tendency to move a little bit in conjunction with each other, it’s completely nominal movement. Nothing wrong with that at all. As we move over, we could illustrate that by this injection that was done.

A lot of times if we call them epoxy injections, (you hear that term), because you see the epoxy on the wall. This one actually had an epoxy injection. You see that amber? It’s very, very, very tight, very hard and you see this coming down. It’s funny, these are both epoxy’s but there’s just different types.

There is more of a paste AB mixture, which this is more of the Vinsol resin type which is going to be actually hardening the wall. You can see where it kind of blew out a little bit, nothing wrong with that, but that just shows tenure. I even told the gentleman that owns this house, or this condo, don’t take this down, don’t clean this up. This is so someone can look at the patient and see some longevity.

As we move over, we see that there was another one down by the door that’s holding. When something like epoxy’s put in a wall, it’s so strong and so hard and it’s so rigid, it actually may have been part of what caused the problem. Because they’re so tight, they couldn’t move a little bit where they were used to moving, nominal movement. These will then, (we’ll go ahead and inject these a little bit with a closed cell urethane), there’s been some hydraulic cement put on here, as well, so these will be ground down, ported, and then injected.

When you’re injecting, it’s coming out the top ports that you know you’re walking your way up the crack. I’ll show you something back here that I think’s kind of interesting. Now, this crack here, these units are kind of coming together, so we’re gonna isolate that one and we’re gonna put a little carbon on that one, we’ll get to that in a minute.

This one shows what closed cell urethane and I believe this was probably injected from the outside. So, pretend we’re inside and we’ve got our port off and we’re injecting, we can see that urethane around the port there. So, what it’s done is it’s caught this seam, so it either came from here and blew out, but this is all mold now that’s on top of that closed cell from the water sitting on it. Molds a four-letter word so don’t get too excited about that.

As we come down, we see the mushroom cloud of urethane. I gotta tell you folks, that’s a winner. That’s really cool. Never saw that before. We’ll take all this out, and we’ll inject it properly with the closed cell urethane, and then that way we’ll have some strength now with some waterproofing. But, this one’s gonna get carbon fiber, too because we’ve gotta give strength to this one, this is part of this whole hinging action here.

So, at the end of the day, there is a difference between epoxy and urethane, and now I think you know a little better. Until next time.